Devalive and Sineflesh originally met at Kingston University in the early 1990s while studying for an Illustration Degree. Sineflesh has been actively involved in the music and art scene for many years, currently also working under the name of Artbear, while Devalive makes collages. Both cite influences from a wide range of experimental and electronic music over the last 40 years - particularly that known as ‘Krautrock’ (including Faust, Neu!, Cluster, Harmonia, Can, early Kraftwerk etc), Suicide, Throbbing Gristle, Coil, Cabaret Voltaire, Fad Gadget, and indeed anything ‘interesting’ that came out of the late 1970s and 80s. Additionally Sineflesh maintains a strong interest in the work of Philip Glass and Steve Reich as well as jazz and classical music of all kinds, while Devalive continues to seek out obscure and rare vinyl releases of a very eclectic, and electronic, nature.

The two tracks are the result of a collaboration between the two musicians and artists. Devalive (living in London) supplied the original field recordings taken in India as well as original vocal ideas, while Artbear (living in East Anglia) responded with electronic soundtracks and distorted guitar. The original sessions, consisting of some dozen segments recorded live in Sineflesh Studio, were conducted in an atmosphere of spontaneity with the duo constructing a range of sonic and rhythmic soundscapes that centred on Devalive’s spoken word pieces. The final two tracks, chosen for this release, were overdubbed with more synthesisers and guitar by Sineflesh in response to Devalive’s feedback, over many weeks. The final result, edited to fit the single format, was mastered by Sineflesh.

"Limited 7". Perverted field recordings and twisted industrial break downs from the duo collaboration of Devalive and Sineflesh. These two tracks are the result of field recordings taken in India slathered over with distorted vocal ideas, with Sineflesh's contributions of screeching guitar and unsettling electronics. These two disturbed tracks are the result of the back-and-forth that existed between the two artists," (Rough Trade)

"Lots of tremolo shapes a repeating percussive beat while the melody line is built up out of a sweeping filter. A very well-executed maneuver. The bit-crushed video game talking returns and says something about love. Look, the beats on both tracks are too slow to dance to. The vocals are too bizarre and non-melodic to sing along to. It is too moody to play at a party and too short to trance out to. They are good songs, I just have no idea what to do with them." (Heathen Harvest) 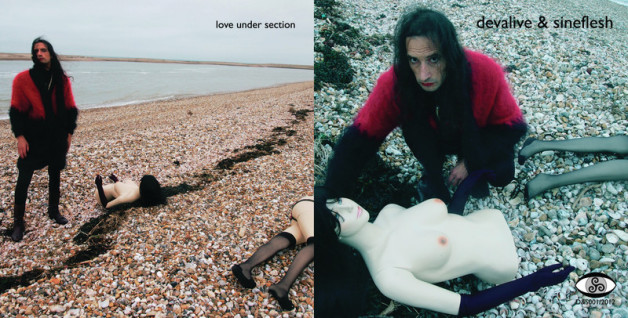 back to top
audio projects
about